The tourists, who have already lost the series after defeats in Brisbane and Melbourne, made a rocky start after Steve Smith called a halt at 538 for eight leaving seven overs for Pakistan to negotiate before tea.

They lost debutant Sharjeel Khan and Babar Azam in one Josh Hazlewood over before the interval with just six runs on the board.

But the in-form Azhar and 114-Test veteran Younis steadied the ship with a century stand and took the tourists to stumps at 126 for two.

Azhar, who scored an unbeaten 205 in last week´s Melbourne Test, was on 58 with 39-year-old Younis providing support on 64 to trail Australia by 412 runs.

Azhar had an escape nearing stumps on 51 when David Warner could not hold a sharp one-handed catch at leg-slip off Nathan Lyon.

Azhar was eight runs short of Mohsin Khan´s 1984 record for the most runs (390) for Pakistan in a series in Australia having tallied 382 at the close, while Younis raised his 1,000 Test runs against Australia.

Handscomb completed his second century in just four Tests to join David Warner (113) and Matthew Renshaw (184) in another huge Australia innings against the beleaguered tourists.

The 25-year-old right-hander was out in bizarre circumstances when he went back in his crease to cut Wahab Riaz only for his bat to dislodge the leg-bail and he was given out hit wicket for 110. 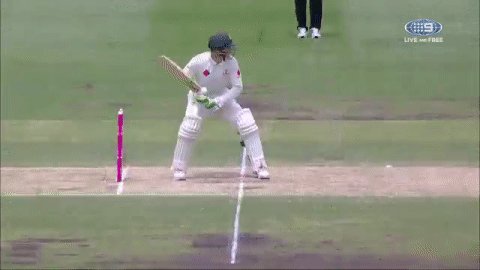 Handscomb, brought into the Australian team along with Renshaw in a shake-up after the Hobart Test debacle against South Africa in November, batted for 205 balls in 319 minutes.

Renshaw´s epic knock ended inside the first half-hour Wednesday when he played paceman Imran Khan on to his stumps.

The 20-year-old Renshaw´s first century in his fourth Test came off 293 balls with 20 fours in 413 minutes. He shared in a 142-run stand with Handscomb.

Debutant Hilton Cartwright hit the highest score by an Australian number six this season with 37 before he was bowled by Imran.

The Zimbabwe-born all-rounder, brought in for his Test debut at the expense of Nic Maddinson, looked solid during his 97-ball stay which eclipsed the previous highest of 26 by Mitchell Marsh against South Africa in Perth in November.

Matt Wade made 29 before he was caught sweeping Azhar and upon Mitchell Starc´s dismissal for 16, skipper Smith called a halt, giving his bowlers 25 minutes at the Pakistan batsmen before tea.

Hazlewood struck twice in five balls with Sharjeel caught by Renshaw at slip for four and he snared Babar leg before wicket for nought.

They showed the gruelling effects of the back-to-back Boxing Day-New Year Tests with Mohammad Amir and leg-spinner Yasir Shah nursing leg injuries and paceman Wahab Riaz leaving the field at one stage holding his right side.