Former Pakistan captain Shahid Afridi, who is also Pakistan’s ambassador for the campaign, unveiled the trophy at the launch ceremony.

“The ICC Champions Trophy is an event which gives me and millions of Pakistan cricket supporters mixed feelings. It is the only ICC major tournament Pakistan has never won, but at the same time it is the only ICC event in which Pakistan has beaten India. That said, I am sure things will soon change as nothing is permanent in life and sport,” said Shahid Afridi. 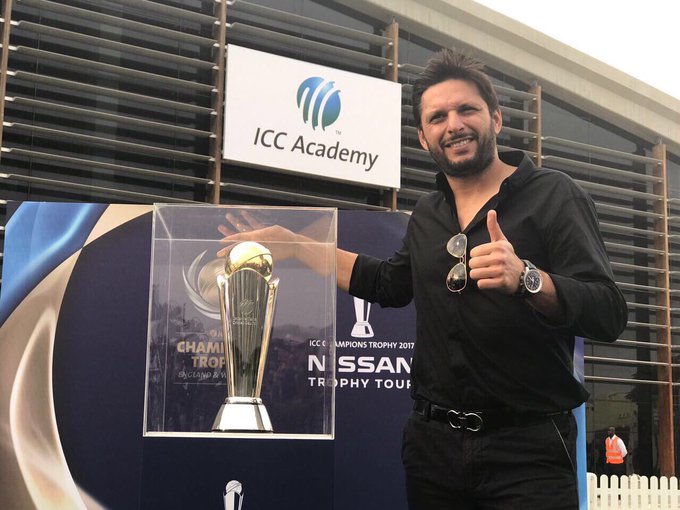 Really happy to be part of Champions Trophy campaign. Thank you ICC for making me the ambassador for

Afridi maintained that the tournament in June will be tough and challenging for the players and will probably be one of the most open events in recent times.

“It will not be prudent to predict a winner, as, at least, five of the eight sides, I think, have an outstanding chance to lift the trophy on 18 June,” said the superstar.

During its global tour, the ICC Champions Trophy will visit 19 cities across all eight competing nations, allowing fans to get a close-up view of the prestigious silverware.

The trophy’s journey will also be documented on ICC’s various social media platforms and fans across the world can track the movements of the trophy via the Nissan trophy tour dedicated section on the ICC website , which will host an interactive map of the trophy tour’s schedule of activities along with a gallery of imagery captured during each of the stops.

The trophy’s journey will start on Thursday, 2 March, when it will depart for India, and after travelling through Bangladesh, Sri Lanka, Pakistan, South Africa, New Zealand and Australia, it will arrive in the United Kingdom on 2 May where the ICC Champions Trophy 2017 will be staged from 1-18 June.

There the ICC Champions Trophy will be joined by the ICC Women’s World Cup on the domestic trophy tour to kick off a summer of cricket in the UK as it tours the cities playing host to the tournaments.

THE FOLLOWING IS THE SCHEDULE OF THE ICC CHAMPIONS TROPHY 2017  TROPHY TOUR: