PESHAWAR:After 72.6% of the year’s polio cases were reported from the Federally Administered Tribal Areas Fata), Governor Mehtab Khan has added to the pressure by directing political agents of all agencies and frontier regions (FR) to vaccinate each and every child. According to documents available with The Express Tribune, the option to inoculate those children who are still living in North Waziristan is still on the table, provided the Civil Military Coordination Committee (CMCC) can find a plausible security plan and method.

Talking to The Express Tribune, FATA Secretariat spokesperson Fazlullah Khan said the governor has asked political agents—with the help of security forces—to make those areas in Fata accessible which have remained in the dark since the Taliban ban of 2012. Even in recent campaigns in Fata, At least 288,708 children were not vaccinated against the crippling disease.

Fazlullah said with the support of local elders, community members and clerics, the government has been trying to rid people of all and any misconceptions regarding the polio vaccination. Parents who refuse to vaccinate their children cite a number of reasons why, including conspiracies such as “people in the West want to render our children impotent”.

Through the army’s efforts to bring peace to Fata, Fazlullah said, perhaps Waziristan has been cleared of all militants and outlaws who were standing in the way of polio vaccinators.

While experts have said there is no way to project a total for 2014, some people participating in the fight against polio put the number at a daunting 200.

The documents also provide a closer look at the spread of polio in Fata.

They confirm that in the most recent campaign, 575,130 children were supposed to be vaccinated in North Waziristan, South Waziristan, Khyber Agency and FR Bannu. But, 288,708 children were left out. That’s nearly 51% for the target missed and as many children left at risk. 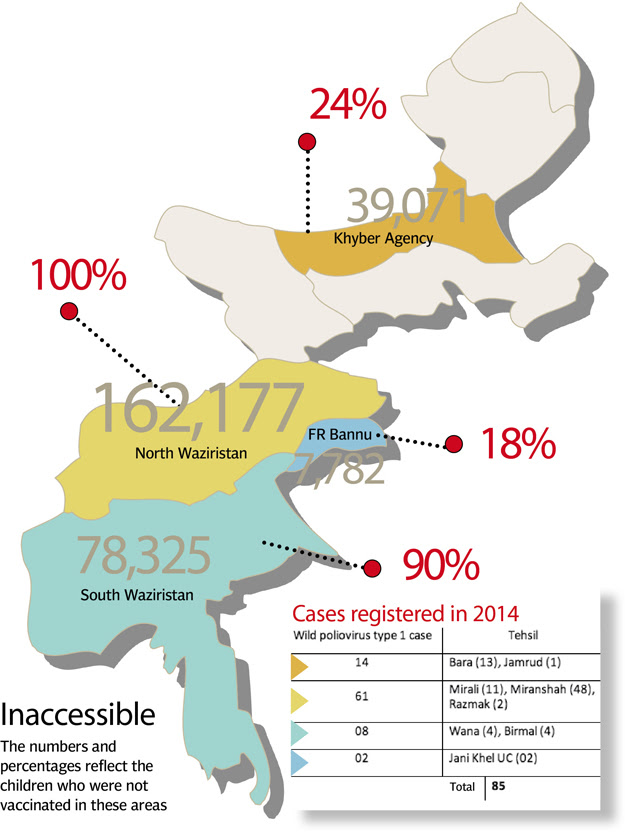 Remarks given in text note that apart from the children of North Waziristan who have been displaced, children in the rest of the four areas remain mostly inaccessible.

According to the paperwork, CMCC will help with security measures for polio teams in Fata and FRs. The CMCC is a body which the federal government has been banking on to reach children while the Taliban’s ban has remained in place.