JUCHITáN DE ZARAGOZA, MEXICO,: Rescuers pulled bodies from the rubble and grieving families carried coffins through the streets on Saturday after Mexico’s biggest earthquake in a century killed 65 people, while elsewhere two died in mudslides unleashed by storm Katia.

Officials raised the death toll from Thursday night’s quake as more bodies were found in the southern states of Oaxaca and Chiapas. In the town of Juchitan, Oaxaca, hundreds of families spent the night camped in the streets, too scared to go back inside for fear of aftershocks.

The Mexican Seismological Service reported 721 aftershocks.
On Saturday, people in Juchitan queued up for food at a shop window as families carried flowers and wreaths, and eventually coffins.
Ignacio Chavez said his son died in the quake.

“He didn’t have time to get out and the building completely collapsed,” Chavez told AFP. “It was a very old building, over 200 years old, and unfortunately out of the seven people who were inside only four were able to be rescued. The other three died.”

Authorities raised the overall death toll throughout Saturday. In Juchitan, emergency teams with search dogs found the body of a policeman under the rubble of city hall. 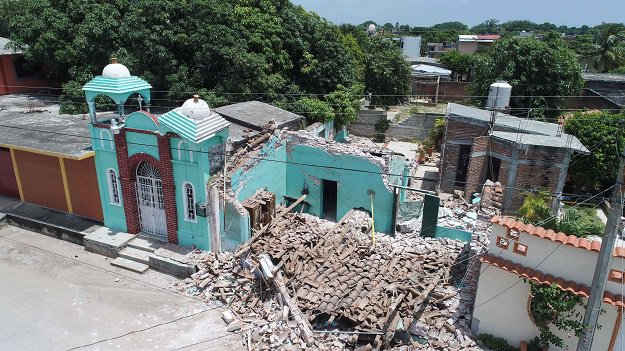 View of damages after the 8.2 magnitude earthquake that hit Mexico’s Pacific coast, in Ixtaltepec, state of Oaxaca. PHOTO: AFP

President Enrique Pena Nieto described the quake as “the largest registered in our country in at least the past 100 years” – stronger even than a devastating 1985 earthquake that killed more than 10,000 people in Mexico City.

Mexico’s seismology service measured on Thursday’s quake at magnitude 8.2. The US Geological Survey measured it at 8.1 – the same magnitude as the 1985 disaster.

The epicenter of Thursday’s quake was in the Pacific Ocean, about 100 kilo meters off the town of Tonala in Chiapas. AFP reporters in Tonala saw residents salvaging belongings from their ruined houses.

“All my body is shaking,” said local man Roberto Olivera, 39. “Every time a car passes by, I feel like it’s an earthquake.” 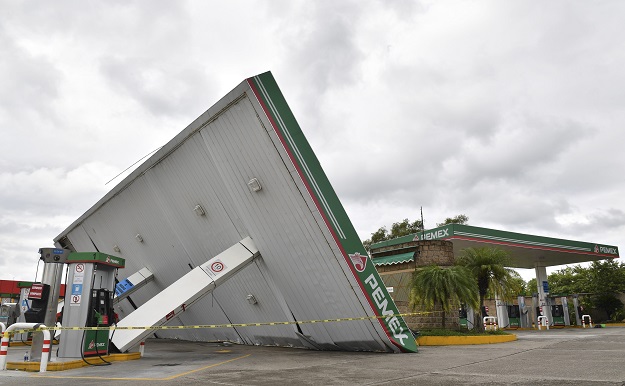 Picture of a gas station damaged by strong winds during the passage of Hurricane Katia in Poza Rica, Veracruz State, Mexico. PHOTO: AFP

Pena Nieto earlier toured Juchitan, its streets a maze of rubble, with roofs, cables, insulation and concrete chunks scattered everywhere. He said authorities were working to “restore water and food supplies and provide medical attention to those affected.”

“I can’t remember an earthquake this terrible,” said Vidal Vera, 29, one of around 300 police officers who dug through the rubble. “I don’t know how you can make sense of it. It’s hard. My sister-in-law’s husband died. His house fell on top of him.”

In Tabasco state, two children were among the dead, officials said. One was crushed by a collapsing wall. Another, an infant on a respirator, died after the quake triggered a power outage.

Meanwhile, Katia made landfall in the neighboring state of Veracruz as a Category One hurricane. It was later downgraded to a tropical storm, before petering out on Saturday.

In Xalapa, the capital of the eastern state of Veracruz, “two people died in mudslides” triggered by the rainstorm, Puente said. In Tecolutla, a coastal town of 8,000 residents, trees and branches were felled as families hunkered down to weather the storm.

Puente said rivers that flooded in Veracruz had damaged 235 homes and affected more than 900 people. “My house fell down at about one o’clock in the morning. I was hiding in another house,” Castellano Espinosa, a 75-year-old tour guide said in Tecolutla.

“I got out in time with my important belongings and papers.”
She was trying to sell some of her belongings to buy food.

Web Desk
Previous ArticleWorld Suicide Prevention Day: How to ‘Take a Minute, Change a Life’
Next Article Senate Body Finally Knows About Quality of Milk, Water & Poultry, & They are Shocked