ISLAMABAD: Four out of every 10 companies and business entities that filed income tax returns did not pay any tax in tax year 2016 while Pakistan’s top 50 companies contributed nearly half of the taxes collected from the corporate sector, according to the Tax Directory 2016.

The high ratio of companies and the Association of Persons (AOPs) that did not contribute any tax points to the weak enforcement of tax laws by the Federal Board of Revenue (FBR). These companies were in addition to those that did not even file income tax returns but were still doing their business.

Companies and partnerships numbering 79,700 filed income tax returns for tax year 2016. Of these, about 31,364 were companies and over 48,000 were partnership concerns.

Owing to complex tax laws, heavy cost of compliance and high rates of corporate tax compared with other countries, entrepreneurs are discouraged from establishing big companies.

Roughly 33,000 or 41.3% of the companies that filed tax returns did not pay any kind of income tax, according to the Tax Directory 2016. This is surprising as even those companies that show losses have to pay minimum 1% tax provided their annual turnover is Rs10 million or more.

Weak enforcement of tax laws remains one of the biggest concerns as tax authorities are not able to nail down those that are doing business and have to seek tax registration to do business.

Although thousands of companies did not file income tax returns in 2016, they submitted mandatory returns with the Securities and Exchange Commission of Pakistan due to stringent enforcement of laws.

“The FBR’s enforcement function at the field level needs to expand manifold and it must regain the trust and confidence of taxpayers which it has nearly lost,” said the Tax Reforms Commission’s report of 2016. 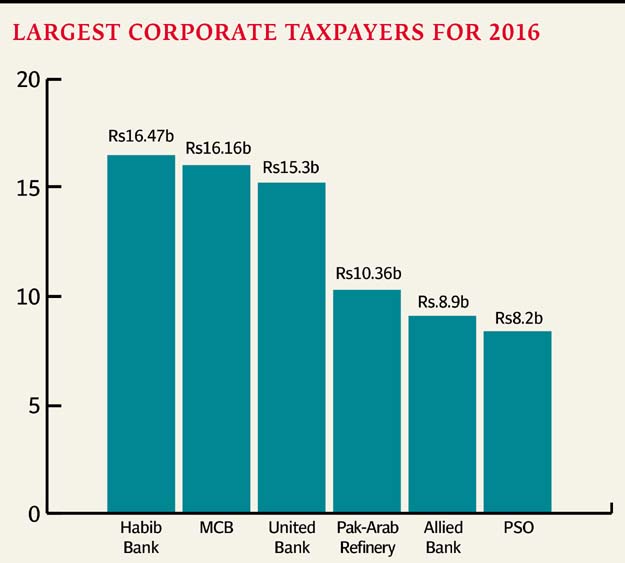 Among the top 10 companies, five were commercial banks, three were oil firms and one each was from the fertiliser and aviation sectors.

There were only 66 companies that paid more than Rs1 billion in income tax in 2016. Total contribution of these companies was calculated at Rs219 billion or 51% of the taxes paid by the corporate sector.